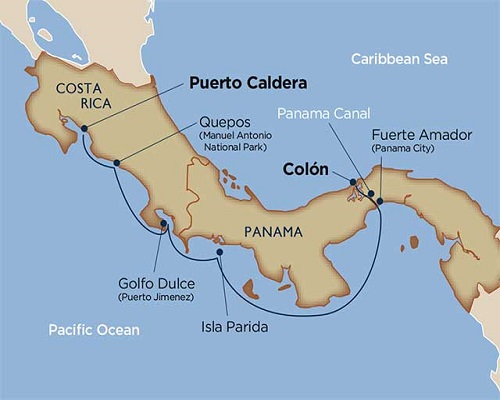 Day Colon, PanamaDepart 06:00 PM
The town was built as the Caribbean terminus of the Panama Railway and is adjacent to the Caribbean end of the Canal. A trip through the coastal rain forest to the old Spanish fortress of San Lorenzo gives great views of wildlife along the way and the seacoast at the end. Visitors often tour to the Miraflores or Gatun Locks of the canal from here. The Chagres National Park offers visits to the indigenous Embera people, and nearby Portobelo is a UNESCO World Heritage Site whose church holds an unusual statue of Christ depicted as a black man.

Day Panama Canal, Panama / Balboa / Fuerte Amador, PanamaArrive 04:00 AM Depart 06:00 PM / Arrive 10:00 PM Depart 11:59 PM
At nearly 48 miles long, on your transit through the Panama Canal you will enter three sets of locks that raise and lower the vessel 85 feet between the calm Pacific Ocean and the shimmering waters of the Atlantic. Your voyage features a daylight hours transit with numerous observation vantage points for outside viewing and comfortable indoor air-conditioned lounges. Expert onboard commentary enhances your journey as you watch the day to day workings of this bucket list experience.

One of the entrances to the Panama Canal on the Pacific side, Balboa/Fuerte Amador was founded in 1519 and is a short distance from Panama City. In 2012 Balboa was ranked #1 in Latin America in the category of world's busiest container ports. Sightseeing highlights include the colonial homes, the Administration Building, the Goethals Memorial, the Prado, and the local handicraft markets of traditional Panamanian crafts. 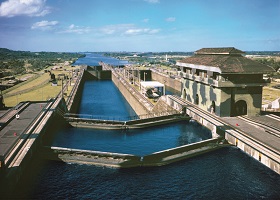 Day Balboa / Fuerte Amador, PanamaArrive 12:01 AM Depart 05:00 PM
One of the entrances to the Panama Canal on the Pacific side, Balboa/Fuerte Amador was founded in 1519 and is a short distance from Panama City. In 2012 Balboa was ranked #1 in Latin America in the category of world's busiest container ports. Sightseeing highlights include the colonial homes, the Administration Building, the Goethals Memorial, the Prado, and the local handicraft markets of traditional Panamanian crafts.

Day Isla Parida, PanamaArrive 08:00 AM Depart 06:00 PM
Located within a Nature Preserve of 50 islands, and part of Chiriqui Marine National Park lovely Isla Parida boasts magnificent beaches, one of which is over 1,300 feet long. The crystal clear waters stay at 82 degrees year round and are filled with marine life. There are numerous hardwood trees like teak, mahogany, and eucalyptus, and fruit trees like mango, banana and coconut trees. Here you will be treated to Windstar's Signature Beach Party on a secluded beach that faces the Pacific Ocean. 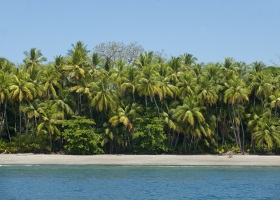 Day Puerto Jimenez (Golfo Dulce), Costa RicaArrive 08:30 AM Depart 05:00 PM
Picture Jurassic foliage growing down steep hillsides all the way to the waterline, the hoots of monkeys echoing through trees choked by orchids. Golfo Dulce is one of Costa RicaÂs most biodiverse areas, where both the jungle and the sea brim with life. Explore the canals by kayak in search of javelinas, butterflies, and more bird species than in all of North America.

Day Quepos, Costa RicaArrive 07:00 AM Depart 06:00 PM
The former banana-exporting town of Quepos is your basecamp for a day of rainforest adventure. Take a walk along trails that weave up to waterfalls, or ride horseback to a beautiful jungle pool. A float trip through a mangrove swamp populated by monkeys, crocodiles, egrets, and herons is also available. Or you may choose a nature walk through Manuel Antonio National Park, with its lovely beaches, easy trails, and abundant animal life.Â 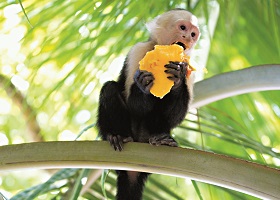