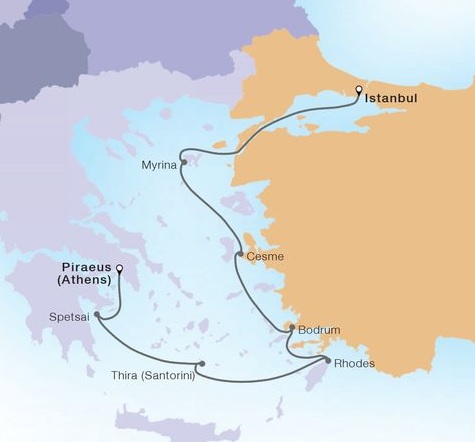 Day Istanbul, TurkeyDeparts 05:00 PM
"Arriving in Istanbul, Turkey on board a ship is an unforgettable experience. The Bosphorus, dividing Europe and Asia, welcomes passengers with ocean breezes, soaring seagulls andÂif youÂre luckyÂplayful dolphins that frolic en route to the port. On deck is where the views of IstanbulÂs best attractions await. The shores of Asia to the east, the first Bosphorus Bridge to the north, and the Âold IstanbulÂ peninsula in the southÂhome to Topkapı Palace and Hagia SophiaÂgive a glimpse of whatÂs to come on your visit. But once you step ashore in Istanbul, youÂll find the most interesting parts of the cityÂneighborhoods with personalities of their own. Explore the sights of bohemian Beyoğlu: a contemporary district brimming with galleries and street art, back street bars, cafÃ©s and fashion outlets that line the busy shopping avenueÂIstiklal Caddesi. Meanwhile, across the Golden Horn, ZeyrekÂs ancient timber houses made it a designated UNESCO World Heritage Site where people live a traditional way of life. Sultanahmet is where travelers of the world sightsee and explore palaces, temples and mosques that once defined the power of the Roman, Byzantine and Ottoman empires. But, as these empire builders learned, itÂs difficult to conquer Istanbul in one trip. YouÂll want come back for more. " 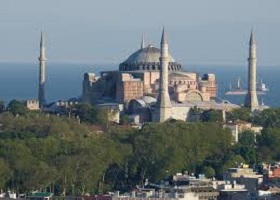 Day Myrina, Nisos Limnos, GreeceArrives 09:00 AM Departs 05:00 PM
"Limnos is an arid, volcanic island located near the mouth of the Dardenelles. The volcano and sulphurous springs on the island inspired many legends in ancient times. Limnos was the mythological home of Hephaistos (Vulcan), who was cast off Mount Olympus by his father Zeus and landed on Limnos, breaking his leg in the process. Lame ever since, the God of Fire lived on the island and toiled at his forges, the volcanoes of the island, teaching the people of the island the art of metalworking." 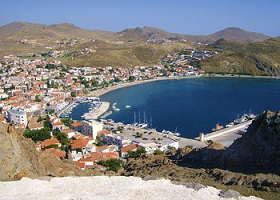 Day Cesme, TurkeyArrives 08:00 AM Departs 06:00 PM
The Ãesme Peninsula, lapped by the waters of the Aegean Sea, lies west of Izmir, in Turkey's Aegean region. "Ãesme", meaning "fountain" in Turkish, derives from the many sources of water found in the area. It is one of Turkey's most beautiful stretches, surrounded by clear blue seas, with landscapes of cultivated fields of aniseed, sesame and artichokes dotted with fig and gum trees. The district is famous for its deep blue sea, golden sands and gentle breeze along its peninsula. In the unspoilt bays you can swim in absolute peace. Visitors will find excellent holiday accommodations, restaurants and sports and entertainment facilities 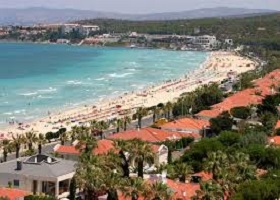 Day Bodrum, TurkeyArrives 08:00 AM Departs 11:00 PM
Today Bodrum is a picturesque yacht harbor filled with traditional wood-varnished sailboats, charming outdoor cafes and streets bursting with small shops selling carpets, leatherwear, jewelry and local artwork. In antiquity, it was the site of ancient Halicarnassus. Under King Mausolus, the city prospered, and in death, the king left the city its most enduring legacy, his majestic tomb, from which we derive the term "mausoleum." Only its massive foundations remain today but it was the largest tomb ever built by the Greeks and one of the Seven Wonders of the Ancient World. Models on the site recreate its form for visitors. Alexander the Great attacked the city in 334 BC, leveling all but the Mausoleum, which was later destroyed by an earthquake. 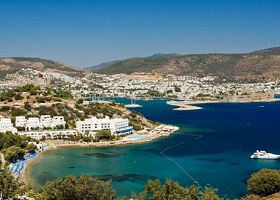 Day Rhodes, GreeceArrives 08:00 AM Departs 06:00 PM
"Rhodes, the largest of the Dodecanese (the name translates as ""twelve islands""), draws more visitors than most other Greek islands. Its capital, Rhodes Town, offers an enduring blend of history and architecture, and the island's interior is filled with lushly forested hills. To the south, Lindos, one of the most stunning villages in all of Greece, is watched over by a picture-perfect ancient ruin on the hill above. The island owes its rich history to a good climate and a strategically valuable position between Asia and Europe. Adding to this is a fine natural port where its former main attraction, an immense statue of the sun god HeliosÂthe Colossus of RhodesÂonce stood. One of the Seven Wonders of the World, the statue made Rhodes a must-visit destination for ancient world travelers until it collapsed in an earthquake in 226 B.C.E. Even the statueÂs ruins were grand enough to bring curious travelers to Rhodes for another 800 years until the metal pieces were melted and sold off by an occupying army." 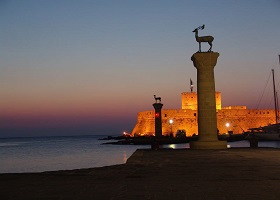 Day Thira (Santorini), GreeceArrives 08:00 AM Departs 05:00 PM
Santorini, the jewel in the crown of Greece's Cyclades, is best known as the island with the giant volcanic caldera at its heart. All but the largest ships can anchor here in this stunningly scenic bay. Cruise visitors who come for an afternoon or a day can immerse themselves in the art, food and legendary wines of this island that some believe may have been the site of the lost civilization of Atlantis. On Santorini you can do as Dionysus, the Greek god of wine, would do and sample the island's wonderful wines or play Indiana Jones and explore the archaeological treasures of ancient Thera. Santorini's pleasures will likely leave you with a taste for more and planning your return. 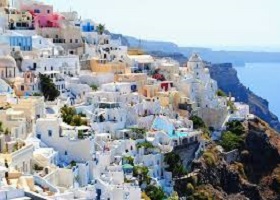 Day Spetsai, Nisos Spetsai (Spetses), GreeceArrives 08:00 AM Departs 05:00 PM
Nicknamed ÂThe Isle of the AromasÂ, Spetsai is a delight to all of the senses. The islandÂs historic old town is a yachtsmanÂs paradise, boasting a stunning harbor, quaint shops and some of the finest restaurants in the Saronic Gulf. The rest of the island is relatively unpopulated and is ringed by a single road, along which you can travel in a horse-drawn carriage. As you pass by quiet, rolling hills, be sure to pause at one of the many quiet coves along the way to refresh yourself with a dip into the cerulean waters. 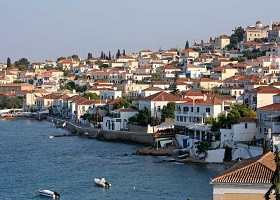 Day Piraeus (Athens), GreeceArrives 07:00 AM
"No modern metropolis is more steeped in myth than Athens, Greece. From the gritty port of PiraeusÂgateway to GreeceÂs fabled islesÂto the ParthenonÂeternal symbol of Western civilizationÂAthens has attracted adventurers and classicists for centuries. This heritage is still very much alive for modern visitors sightseeing in Athens: ancient stadiums and temples dwell alongside apartment blocks, modern performances are staged in the marble amphitheaters where Greek drama was born and millennia-old monuments are scattered in the archaeological park that circles the Acropolis. One of the worldÂs oldest maritime powers, Athens is blessed with a balmy climate and stunning coastline. The seaside suburbs of Athens are scalloped with sandy beaches, fancy yacht clubs and glamorous beach bars. While the Athenian lifestyle is known for late-night dinners and dancing until dawn, the city shines brightly by day in the bustling markets, lively cafÃ©s and fascinating museums that illuminate Greece's past and present. Contemplate the magnitude of all that culture and ancient tourist attractions while marveling at the sun setting into the Aegean or rising over the Acropolis. "