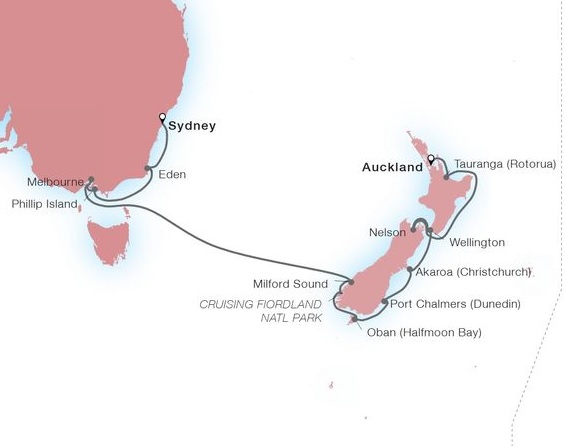 Day Tauranga (Rotorua), New ZealandArrives 07:00 AM Departs 06:00 PM
"The curved shoreline of the Bay of PlentyÂknown in Maori as Te Moana-a-ToiÂis home to incredible surfing, white-sand beaches and New Zealand's only active marine volcano. Tauranga, with 130,000 residents, is the largest city on the Bay of Plenty and fifth largest in New Zealand. The city offers visitors a number of water-focused activities, like sailing and kayaking, as well as drier alternatives such as shopping and people-watching at a cafÃ© in the Historic Village. Tauranga is also a great jumping-off point for exploring nearby beaches and Te Puke, the kiwifruit capital of the world, as well as a wealth of Maori cultural sites. The world-famous geothermal wonderland of Rotorua, nicknamed Sulfur City, has been a major Polynesian spa resort town since visitors first arrived in the late 1800s. In Maori, roto means lake and rua means two, but Rotorua actually comprises 18 lakesÂplus an incredible redwood forest."

Day Nelson, New ZealandArrives 10:00 AM Departs 08:00 PM
Located on the northwest end of the South Island, Nelson enjoys the sunniest weather in New Zealand, which helps ripen the sauvignon blanc grapes that have made nearby Marlborough a global wine mecca. To the west, the Abel Tasman National Park offers outdoor action, while to the east a bit, Havelock is the self-proclaimed ÂGreenlip Mussel Capital of the World!Â 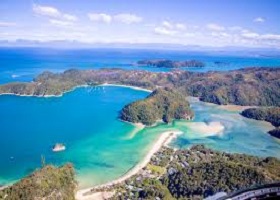 Day Wellington, New ZealandArrives 08:00 AM Departs 06:00 PM
"New Zealand's cool little capital is located at the southern tip of the North Island, meaning it's blessed with a beautiful waterfront, fresh seafood and unpredictable weather. So famously tempestuous is Windy Welly that visitors quickly learn not to go outside without an umbrella and will spend more time than usual talking about the weather. Politics is a hot topic too, with government workers buzzing about the Beehive, as the distinctive Parliament building is colloquially known. Wellington is also known for culture and cuisine. Learn about Maori history and Kiwiana at Te Papa, the national museum; go behind the scenes of the Lord of the Rings movies made in Wellywood; and wash down a plate of chilled bluff oysters with a crisp sauvignon blanc at a Cuba Street restaurant. Gourmands are spoiled for choice with the city's many coffee microroasteries, craft breweries, innovative chefs and artisanal markets. Fortunately for your waistline, itÂs also a terrific city for walking, hiking and cycling, with a compact historic core hugged by green hills and dotted with impossibly perched houses. They say you can't beat Wellington on a good dayÂbut visitors will soon discover that even if it's wet and windy, it's always a good day to be in Wellington. "

Day Akaroa (Christchurch), New ZealandArrives 08:00 AM Departs 05:00 PM
Set on a beautiful, sheltered harbor and nestled in the heart of an ancient volcano, Akaroa is a popular resort village. Located 50 miles southeast of Christchurch, this quaint seaside town is situated on the southern side of the Banks Peninsula and has a distinct French flavor to it. Many street names are of French origin because of its French Whaling and colonial history. One of the first settlements in the Canterbury region of the South New Zealand Island, the town has a rich Maori and British heritage, as well as its French history. Today, the town center is dotted with colonial architecture, and the harbor area is lined with boutiques and cafes. 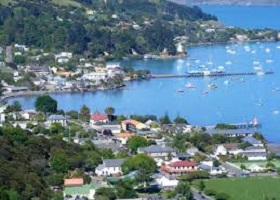 Day Port Chalmers (Dunedin), New ZealandArrives 08:00 AM Departs 08:00 PM
"Much of New Zealand feels like England, by way of Polynesia. There are a few exceptions, though, such as the town of Akaroa, a former French settlement, and the distinctly Scottish city of Dunedin, named after the Scottish Gaelic name for Edinburgh. After Dunedin was founded in 1848, city surveyor Charles Kettle attempted to impose Edinburgh's New Town grid plan on the growing city. But the Otago Peninsula's hilly landscape proved challengingÂfor evidence, note that Dunedin has one of the world's steepest streets (Baldwin Street). The volcanic remnants around the harbor make for a dramatic backdrop. Dunedin's prominence during the gold rush in the late 19th century resulted in many grand Victorian and Edwardian buildings. Thanks to the beautiful University of Otago (the country's oldest), there's a large student population to keep the city vibrant and modern. But Dunedin's heritage is always proudly on display: The magnificent Dunedin Railway Station and Larnach Castle have been restored to their full glory, and the fascinating Toitu Otago Settlers Museum provides a glimpse into the lives of early residents. Outside the city, the Otago Peninsula is lined with scenic beaches and home to rare birdlife like the royal albatross and yellow-eyed penguin. "

Day Oban (Halfmoon Bay), New ZealandArrives 08:00 AM Departs 05:00 PM
You might not realize that New Zealand has a third island. It hangs beneath the South Island and is just about the last inhabited place before Antarctica. The island itself is only about four percent inhabited, and that is its attraction. It is an unspoiled piece of primeval New Zealand. Oban is a very small town, about 800 souls. The phonebook is printed on a single sheet of A4 paper! 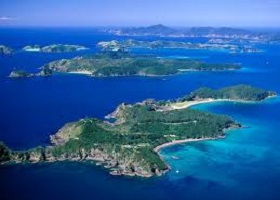 "Milford Sound, or Piopiotahi (its name in Maori), sits on the west coast of New Zealand's South Island and was first called the Eighth Wonder of the World by none other than Rudyard Kipling, who had seen some pretty wonderful places. As you sail up the 15-kilometer-long (nine-mile-long) sound, with soaring snow-topped peaks looming aboveÂthe tallest reaches an altitude of 1,517 meters (4,977 feet)Âyou'll understand Kipling's enthusiasm. Although it is called a sound, it is technically a fjordÂa narrow inlet created by glacial erosion over thousands of years. While its geological history is long, its human history is not. It is believed that the Maori first explored the sound, and the rest of the area that is now part of Fiordland National Park, around 1,000 years ago; Captain Cook followed in 1770. But neither Maori nor Europeans created permanent settlements of any significance, and the land was pristine when Fiordland National Park, New Zealand's largest national park, was established in 1952. While many walking trails cross the park, the most breathtaking views are arguably those from the water, with the sheer rock faces looming above your ship as you sail through this majestic landscape." 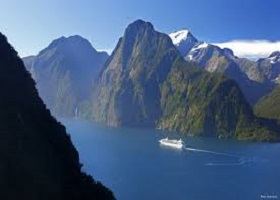 Day Melbourne, AustraliaArrives 08:00 AM Departs 06:00 PM
"Melbourne is consistently voted one of the world's most livable citiesÂand for good reason. This is AustraliaÂs cosmopolitan heart with cutting-edge art and architecture, historic galleries, attractions and museums, plus a dizzying range of restaurants, bistros, markets and bars. It's renowned for its sporting culture, home to the esteemed Melbourne Cricket Ground and Australian rules football teams. The famous laneways of Melbourne bustle with hidden bars and eateries, while myriad beaches and parks allow for the ultimate outdoor lifestyle and active things to do. ItÂs a melting pot of cultures and a city of gourmands who demand excellent food and find it everywhereÂfrom modern Australian cuisine and delicious Asian fusion fare to low-key cafÃ©s serving the best coffee youÂve ever tasted."

Day Phillip Island, Victoria, AustraliaArrives 08:00 AM Departs 11:00 PM
Located southeast of Melbourne on the coast of Victoria state, Phillip Island is a favorite place for nature lovers. Aside from beaches, the island also offers The Nobbies, a rugged headland graced with boardwalks for viewing the Bass Strait waters, slopes where seabirds nest and, at Seal Rocks offshore, the largest breeding colony of Southern Fur Seals in Australia. Another daytime attraction is the Koala Conservation Centre, where visitors can view these amiable marsupials at tree-top level on a skywalk, or stroll the bush among wallabies, possums, echidnas and other wildlife. A highlight is the sunset ÂParade of PenguinsÂ when Little Penguins, the worldÂs smallest breed, waddle up from the sea to overnight in their nests among the dunes. 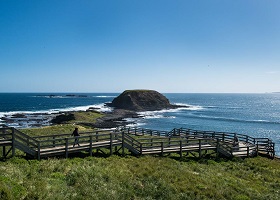 Day Eden, New South Wales, AustraliaArrives 07:00 AM Departs 02:00 PM
This picturesque town near the border of New South Wales and Victoria was the site of a thriving shore-based whaling industry that depended on the cooperation of orcas, which herded baleen whales into Twofold Bay. Learn about it at the small but informative Killer Whale Museum. The Sapphire Coast Marine Discovery Centre concentrates on smaller sea-life. Ben BoydÂs Tower looms over Disaster Bay in the scenic national park named after the eccentric 19th-century magnate. The townÂs name is unrelated to the biblical garden. It was named for George Eden, first Earl of Auckland. 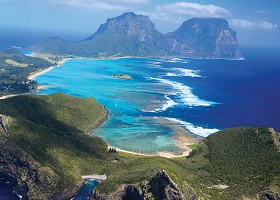 Day Sydney, AustraliaArrives 07:00 AM
"If you want a snapshot of Australia's appeal, look no further than Sydney: The idyllic lifestyle, friendly locals and drop-dead natural beauty of this approachable metropolis and its attractions explain why the country tops so many travelers' wish lists. But Sydney is more than just the embodiment of classic antipodean coolÂthe city is in a constant state of evolution. A list of what to do in Sydney might start with the white-hot nightlife, with its new cocktail bars and idiosyncratic mixology dens. Inventive restaurants helmed by high-caliber chefs are dishing up everything from posh pan-Asian to Argentine street food, while the famous dining temples that put Sydney on the gastronomic map are still going strong too. The famed harbor is among the top sightsÂhome to twin icons the Sydney Opera House and the Sydney Harbour Bridge, it is the stepping-off point for some of the city's best cultural attractions and sightseeing. In one day you can sail around the harbor, get a behind-the-scenes tour of the opera house and climb the bridge, with time to spare for people-watching over a flat white at a waterfront cafÃ©."