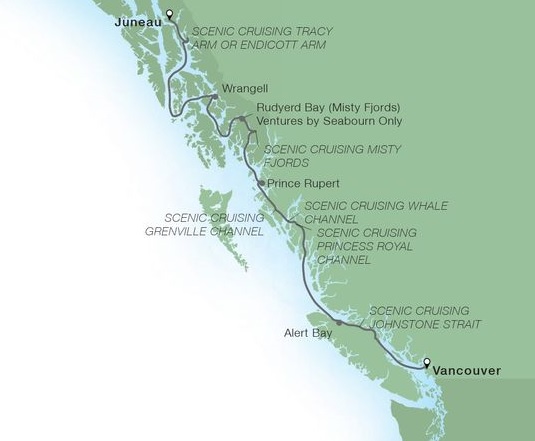 Day Juneau, AlaskaDeparts 09:00 PM
"Juneau, Alaska may well be the most remote, most beautiful and strangest state capital in the United States. Surrounded by water, forest and mountain sights, visitors seeking things to do in Juneau indoors and outdoors can hike a glacier, eat fresh-caught fish on a seaside patio and tour a grand capitol building all in one day. The city itself is pleasant, but the real highlight of a visit to Juneau is tracking down some wildlife. You can hike up Mount Roberts to chance upon wild deer and bald eagles. Most sightseeing and whale-watching tours head north to Auke BayÂbring a good pair of binoculars to get the best view of these majestic and surprisingly graceful creatures. If you prefer land mammals, catch a floatplane to a nearby wildlife reserve such as Chichagof or Admiralty Island to spy some bears lolling around. The sleepy, misty city of around 32,000Âmostly fishermen and small-business ownersÂhas a frontier town vibe, but welcomes more than a million visitors each summer to its natural attractions, cementing Juneau as AlaskaÂs number-one tourist destination. "

Day Scenic cruising Tracy Arm or Endicott Arm / Cruising Stephens PassageArrives 08:00 AM Departs 05:00 PM / Cruising only
Stunningly beautiful Tracy Arm is a fjord 45 miles south of Juneau that actually consists of two deep and narrow fjords Â Tracy Arm and Endicott Arm. Both fjords are over 30 miles long. At the end of Tracy Arm are the impressive twin Sawyer Glaciers. Wildlife in the area includes black and brown bears, deer, wolves, harbor seals and a variety of birds. What you'll be able to see today and how far we can travel up Tracy Arm is weather and ice dependent.

One of the straightest stretches of the Inside Passage is the Stephens Passage just south of Juneau, a 105-mile channel between 5,000-foot peaks that cuts through the Alexander Archipelago between Admiralty Island on the west and the mainland and Douglas Island on the east. It is a good place to be on deck, because Admiralty boasts more bears than people, and the spruce and hemlock forests come right down to the water. The Passage is generally considered some of the best whale-watching water in Alaska, and also holds plentiful populations of huge Steller sea lions, as well as flocks of gulls and guillemots that clatter aloft as the ship passes. The passage was named by George Vancouver in 1794 after being charted by Joseph Whidbey. 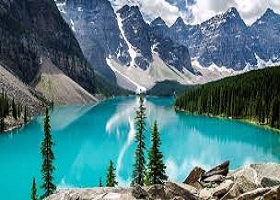 Day Transit Decision Passage / Wrangell, Alaska, US / Cruising Stikine StraitCruising / Arrives 08:00 AM Departs 06:00 PM / Cruising
Decision Passage is the western end of the Sumner Strait, which runs through the Alexander Archipelago into the Pacific Ocean in Southeastern Alaska, bounded on the north by Kuiu Island and Cape Decision, the location of a 1932 lighthouse. This is the route your ship takes when coming from or going to the colorful historic community of Sitka on the west coast of Baranof Island, which was originally the Russian fortress town of New Archangel.

One of the thousands of islands of the Alexander Archipelago, Wrangell Island sits at the heart of the Tongass National Rain Forest and receives approximately 80Â (203 cm) of rain per year. The city of Wrangell, a true Alaskan frontier town, sits at the northern end of the island, a short distance from the mouth of the mighty Stikine River. The history of Wrangell is deeply rooted in the Tlingit people, the fur trade and the gold rush. The Stikine River trade route brought the Tlingit people here thousands of years ago, evidenced by some forty petroglyphs at Petroglyph Beach State Historic Site and Totem Park. 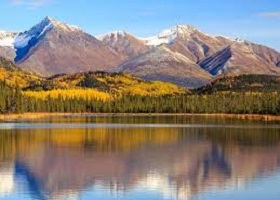 Day Cruising Behm Canal / Rudyerd Bay (Misty Fjords) Ventures by Seabourn Only / Scenic cruising Misty FjordsCruising / Arrives 08:00 AM Departs 06:00 PM / Cruising
The 108-mile Behm Canal runs from the Clarence Strait through the Alexander Archipelago of Southeast Alaska, and into the channel separating Revillagigedo Island from the mainland. It forms part Inside Passage on the route between Ketchikan and the Misty Fjords National Monument. The canal was named by George Vancouver during his surveying expedition in 1793, in honor of Magnus von Behm, who had been governor of Kamchatka in the Russian Far East when Vancouver called at Petropavlovsk with Captain CookÂs expedition following the CookÂs murder in Hawaii.

Misty Fjords, with its gorgeous views of natural formations is a national monument and wilderness area with steep valleys formed by glaciers and lava flows. It is part of the Tongass National Forest and is about 40 miles east of Ketchikan along the Inside Passage. With its icy blue lakes, waterfalls, snowcapped peaks and glacial valleys literally everywhere you point your camera you will get a postcard picture, depending on the weather of course. 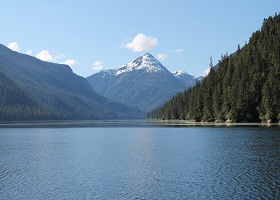 Day Prince Rupert, BC, CanadaArrives 08:00 AM Departs 11:00 PM
Picturesque Prince Rupert, located on Kaien Island, just north of the mouth of the Skeena River is rich in culture and heritage. Prince Rupert was founded in 1910 on a site that has been inhabited by First Nations people for over 10,000 years. The area is rich with wildlife like whales, eagles, salmon and grizzly bears. The Khutzeymateen Grizzly Bear Sanctuary features one of the densest remaining bear populations in North America. 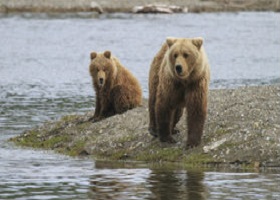 Day Scenic cruising Grenville Channel / Scenic cruising Whale Channel / Scenic cruising Princess Royal Channelcruising / Arrives 10:00 AM Departs 02:00 PM / Cruising
Mountains of 1,500 to 3,500 feet surround Grenville Channel, the most spectacular channel along the Inside Passage located between Pitt Island and the mainland south of Prince Rupert. The narrowest portion is a mere 1,400 feet wide, but depths of up to 1,620 feet allow vessels to travel close to the shore. Relax and enjoy the scenic 43 miles of this waterway, and be on the lookout for the wildlife living here. 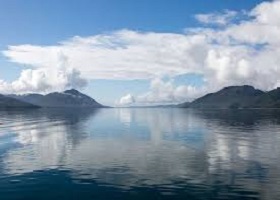 Day Alert Bay, British Columbia, Canada / Scenic cruising Johnstone Strait / Transit the Seymour NarrowsArrives 06:00 AM Departs 04:00 PM / Cruising / Cruising
Begin your introduction to Alert Bay with a step back into the past. Just 40 yards from the pier, you will find the Chiefs' Burial Grounds. Your local guide will talk about the totems here, and the history of the First Nations peoples in this area. Take photos as you listen.

Then, hop on a local school bus and visit the U'mista Cultural Centre. A docent explains the historic Potlatch Collection and the ceremonies behind the masks that are on display, while an audiovisual presentation offers some more in-depth information. This really beautiful collection of regalia and masks was confiscated by the government in 1922, and was returned to its rightful owners in 1980. View the other galleries and visit the weavers, carvers and storytellers outdoors, by the waterfront. Scenic cruising Johnstone Strait 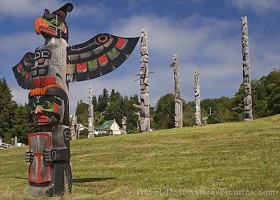 Day Vancouver, BC, CanadaArrives 07:00 AM
VancouverÂs location at the mouth of the Fraser River and on the waterways of the Strait of Georgia, Howe Sound, Burrard Inlet and all their tributaries makes this busy seaport an easy place for meeting. It is one of CanadaÂs most populated, most ethnically diverse cities that is a popular filming location. Visit the interesting neighborhoods of Gastown, Granville Island and Chinatown. Walk across the Capilano Suspension Bridge and stroll through Stanley Park. See the Vancouver Art Gallery and the Museum of Anthropology. There is an amazing variety of things to see and do here.